This week’s episode of WWE Monday Night Raw will crown new Women’s Tag Team Champions, Bobby Lashley takes on The Miz, Sami Zayn & The Usos will be there, plus Kurt Angle!

The August 29 edition of Raw takes place at the PPG Paints Arena in Pittsburgh, Pennsylvania. It takes place just five days before the massive WWE Clash at the Castle event in Cardiff, Wales. Since there are only five official matches at Clash going into Raw, it’s likely that WWE will add more matches during Raw. Here’s what WWE is promoting going into Raw.

There will be new Women’s Tag Team Champions crowned on Raw as the Smackdown team of Raquel Rodriguez & Aliyah head to Raw to face Dakota Kai & IYO SKY, who will likely have their friend Bayley by their side. The titles have been vacant since May when Sasha Banks & Naomi were frustrated with things in WWE, so they vacated the titles and went home. After new champions are crowned, it’s possible Banks & Naomi could return since they are rumored to have agreed to come back to WWE.

The Usos and Sami Zayn are headed to Monday Night Raw!

As the Undisputed WWE Tag Team Champions, The Usos have been on Raw many times in recent months while Sami Zayn is a Smackdown guy, who is apparently heading to Raw with The Usos. At the end of the August 26 episode of Smackdown, that trio joined Roman Reigns in beating up Drew McIntyre to end the show. Find out what that trio may be up to when they appear on Raw.

Riddle to stand face-to-face with Seth “Freakin” Rollins ahead of WWE Clash at the Castle.

One of the biggest matches at Clash at the Castle will see Riddle face Seth “Freakin” Rollins in a singles match that was supposed to happen at SummerSlam, but Riddle was injured as part of the storyline to delay the match until the Clash show. The two men have engaged in some wild brawls over the past few weeks. Now they will stand face to face to likely exchange a few words before they start fighting again.

Bobby Lashley looks to give The Miz an all mighty beating!

The United States Champion Bobby Lashley will face off against The Miz. Recently, Lashley defeated The Miz’s ally Ciampa in a competitive match to keep the US Title, so it will be interesting to see if Ciampa gets involved to help Miz try to get the win.

The lineup for WWE Clash at the Castle this Saturday, September 4th looks like this going into Raw: 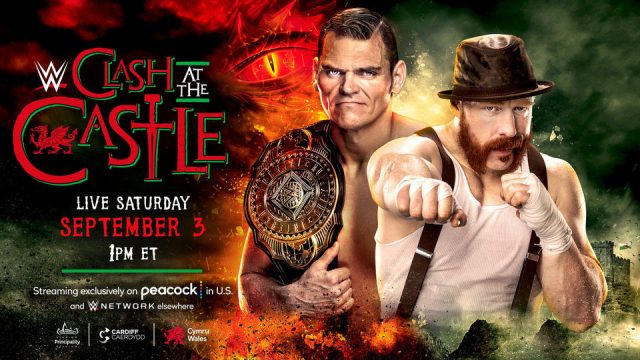 You can watch WWE Clash at the Castle, streaming live Saturday, September 3, at 1pm ET/10am PT on Peacock in the United States and on WWE Network everywhere else.

As for Raw, you can read all about what happens in The John Report Raw Deal review of the show exclusively right here on TJRWrestling. As Kurt Angle might say, it’s true…it’s damn true.

“It definitely is a new thing for me”