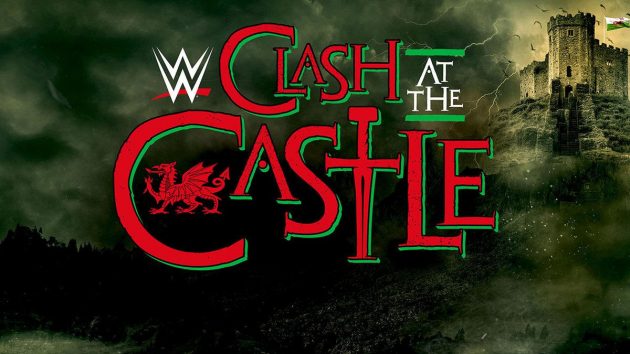 WWE Clash at the Castle 2022 is set to air on WWE Network and Peacock. We’re also looking for reader participation, with viewers offering their own predictions in the comment section below. While we aim to provide WWE’s preview for upcoming major events here and in similar posts on a regular basis going forward, we do have a more readily updated events page that covers these shows, plus cards for weekly content which can be seen here.

WWE Clash at the Castle 2022 is set to air on WWE Network and Peacock this Saturday. More specifically, the special will air on Saturday, September 3rd, 2022. The event is scheduled to begin at 1 PM EST with a Kickoff show beginning at 12 PM EST and it’ll feature top stars from both brands, multiple title matches, and more.

WWE Clash at the Castle 2022 Preview

Below is the match graphic and WWE.com preview for each match:

Drew McIntyre has his sights on making history. When the WWE Clash at the Castle Premium Live Event comes to Cardiff, Wales, on Sept. 3, McIntyre will look to end Roman Reigns’ more than 700-day reign as champion.

The SmackDown Warrior defeated Sheamus in an absolutely brutal Good Old Fashioned Donnybrook Match to win his the Undisputed WWE Universal Championship opportunity on the July 29 episode of SmackDown. The next night, Reigns survived a hellish Last Man Standing Match against Brock Lesnar to retain his title and set the stage for a title showdown.

The highly anticipated WWE Clash at the Castle emanates from Principality Stadium in Cardiff, Wales, on Saturday, Sept. 3. Tickets are available now for the first major stadium event to be held in the United Kingdom in more than 30 years! 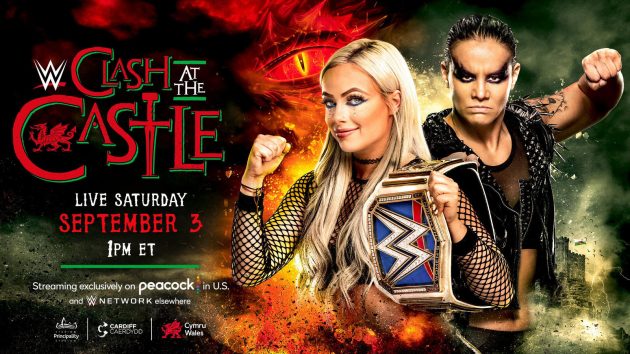 SmackDown Women’s Champion Liv Morgan will put her title on the line against the dangerous Shayna Baszler at WWE Clash at the Castle in Cardiff, Wales.

The extraordinary Morgan captured the SmackDown Women’s Title on sheer will. After overcoming six other Superstars in a whirlwind Money in the Bank Ladder Match, Liv cashed-in her coveted contract on the same night to best a war-torn Ronda Rousey and lay claim to the gold. She then followed that up with a controversial victory over The Baddest Woman on the Planet in a rematch at SummerSlam. Rousey was suspended for attacking a WWE official in the aftermath of the matchup, and the WWE Universe instantly began to wonder who would set up to challenge the tough titleholder.

Enter Shayna Baszler. On the first SmackDown after The Biggest Event of the Summer, The Submission Magician overcame Raquel Rodriguez, Aliyah, Shotzi, Xia Li, Natalya and Sonya Deville to win the right to challenge Morgan at the historic event on Sept. 3 in Cardiff, Wales. 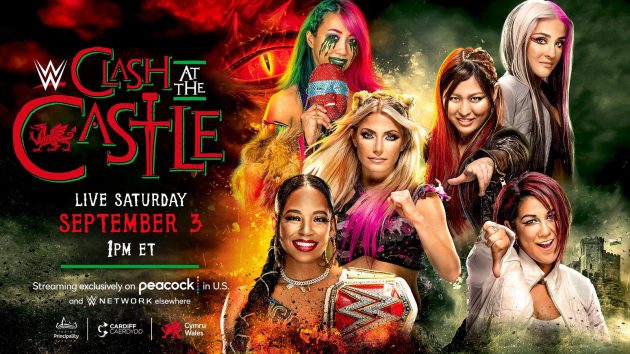 At SummerSlam, the WWE Universe was shaken to its core when Bayley made her ferocious comeback. She wasn’t alone, however, as she brought IYO SKY and a returning Dakota Kai with her.

Since then, they have made one thing clear: They are here to control WWE.

Standing in their way, however, is the Raw Women’s Champion Bianca Belair, along with Alexa Bliss and Asuka. The EST of WWE did not take kindly to having her thunder stolen at SummerSlam and has a bone to pick with Bayley’s new faction after they took out Becky Lynch the night after SummerSlam.

Additionally, Alexa Bliss and Asuka are primed to compete in the WWE Women’s Tag Team Championship Tournament, as are Dakota Kai and IYO SKY. Now the two trios will head to Cardiff, Wales to battle each other at WWE Clash at the Castle.

Which team will leave Cardiff, Wales in control? The highly anticipated WWE Clash at the Castle emanates from Principality Stadium in Cardiff, Wales, on Saturday, Sept. 3. Tickets are available now for the first major stadium event to be held in the United Kingdom in more than 30 years! 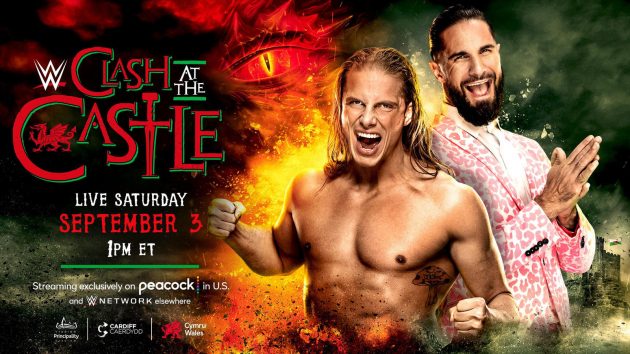 In what is sure to be a volatile showdown, Riddle will go one-on-one with Seth “Freakin” Rollins at WWE Clash at the Castle in a quest for payback.

The Original Bro has found himself in the crosshairs of The Visionary since the absence of Randy Orton has left Riddle to battle it out on his own. Although they were supposed to throw down at SummerSlam, Riddle found himself not medically cleared to compete, and the contest never took place.

Riddle has since been sidelined with a stinger injury after Rollins Stomped him into the steel ring steps. Before he could give his return address on the Aug. 15 edition of Raw, however, The Visionary made an unexpected appearance.

After Rollins continued to mock his adversary, The Original Bro ultimately stormed the ring and ignited a huge brawl with his adversary. In the wake of the free-for-all, Riddle challenged Rollins to a showdown at WWE Clash at the Castle. 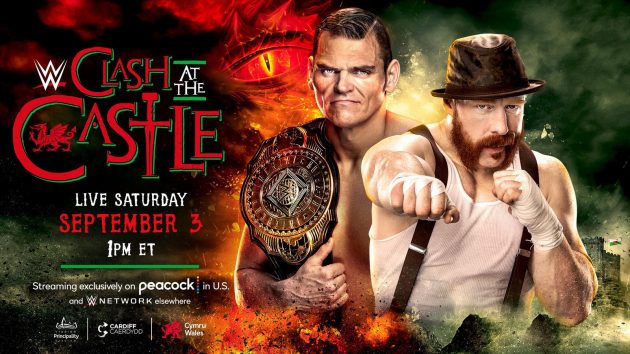 Sheamus loves a good fight. He will get that and so much more when he attempts to dethrone Intercontinental Champion Gunther at WWE Clash at the Castle.

After holding the NXT United Kingdom Championship for an astonishing 870 days, Gunther turned his attention SmackDown. With Ludwig Kaiser at his side and a brutal arsenal at his disposal, The Ring General has dominated the blue brand and defeated Ricochet to claim the Intercontinental Title.

Now, he is headed back across the pond to defend the workhorse title at the historic Premium Live Event, and he has made it clear that he considers the title “sacred.”

Sheamus reigned supreme over Ricochet, Madcap Moss, Happy Corbin and Sami Zayn a Fatal 5-Way Match on SmackDown to earn the right to face the vicious titleholder. A four-time World Champion, the highly-decorated Celtic Warrior is as tough as nails and would like nothing more than to seize the Intercontinental Title in Cardiff, Wales. Backed by The Brawling Brutes, Sheamus presents an epic challenge to the titleholder. 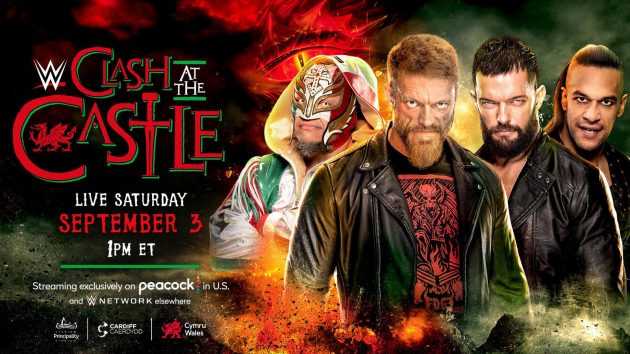 The Judgment Day’s modus operandi has been to eradicate the veterans and so called “old-timers” from WWE.

First was Edge, who they brutally kicked out of his own group with a Con-Chair-To the former leader. Next came Rey Mysterio, who along with his son Dominik, took the fight to the nefarious trio, but were eventually beaten.

At SummerSlam, The Rated-R-Superstar made his fiery return and gained retribution when he defeated Damian Priest in Edge’s hometown of Toronto on the August 22 edition of Raw. Now, Edge looks to seek the eradication of the very group he created.

Edge and Rey Mysterio look to turn back the clock when they face Finn Bálor and Priest in a high-stakes match at WWE Clash at the Castle.

A wrinkle in this match has been Dominik Mysterio, who didn’t take kindly to his father picking Edge over him. Dominik has suffered his fair share of abuse from Rhea Ripley, being left beaten on several occasions. However, Dominik, as well as Ripley, will be ringside, making this matchup even more combustible. 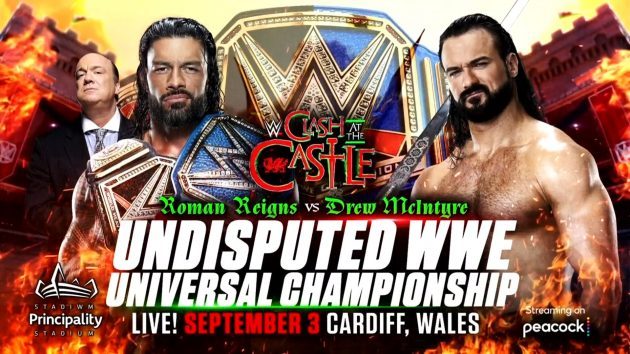 Below is a quick card for WWE Clash at the Castle 2022:

So, what do you think? Who do you see winning each of the matches? Will you be checking out this show? Let us know your thoughts down in the comment section below.

It will be a very busy week on WWE Network and Peacock. Two major events will air over the weekend including WWE Clash at the Castle….

WWE has revealed that a brand new episode of This Is Awesome is set to premiere on WWE Network and Peacock this week. The episode was…

Every week we receive original content, typical WWE Network and Peacock programming, plus archived content. Thanks to our affiliated WWE Network reddit owner TonyG, who also runs the WWE…

Sometimes, there is WWE Network news that either doesn’t warrant a post of its own, or there simply isn’t time to get to it due to…

One of the most exciting aspects about the WWE Network and Peacock is seeing new or classic content added to the archives. Our initial offering of…