Is Bray Wyatt Returning to WWE at Clash at the Castle?

Since the second news that the WWE released Bray Wyatt, everyone’s been wondering and speculating where he’d go next.

The consensus among fans was that he’d go to AEW, but news of him working on a movie took many by surprise and left us wondering when or if he’d return to the ring.

Is Bray Wyatt Returning to WWE at Clash at the Castle?

Over the following months, he dropped some hints that he could be returning as he trademarked a new name and posted cryptic messages on social media.

John Cena even dropped a hint there could be something in the works, but he’s known for posting things and allowing fans to work out what they think it is.

Then there are reports going around that Bray Wyatt booked a flight from Florida to Cardiff scheduled to leave on Thursday (August 1) and has a car scheduled to drive him to Cardiff after he arrives. 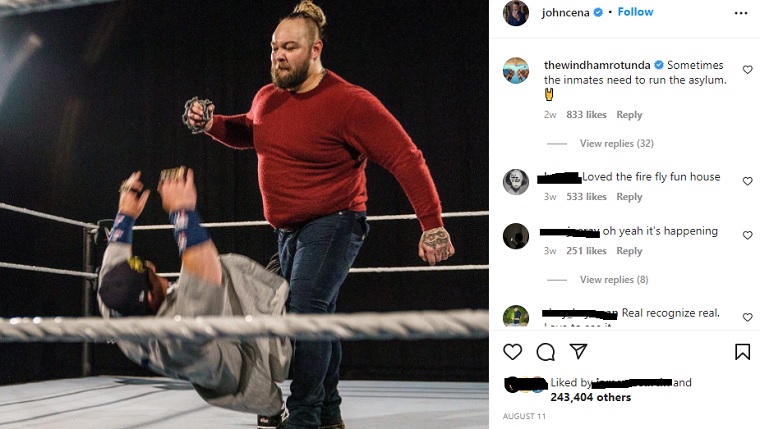 For many, it’s hard to believe Wyatt’s coming back after being teased for so long, like when many expected him to return at SummerSlam.

We think he’ll return at Clash at the Castle and cost Roman Reigns the title against Drew McIntyre as revenge for Reigns taking his title two years ago by coming out late and pinning Braun Strowman.

This makes sense as a storyline as The Fiend character came out to avenge Wyatt being wronged, and since he lost the title as the Fiend, he’d want payback.

We were teased when Alexa Bliss turned to give Reigns the stink eye when they passed on the ramp after he won the belt, but like many storylines during the final part of Vince McMahon’s run, nothing came of it.

Another way it works is Triple H has been righting many wrongs, in the eyes of fans, on releasing and managing talent and his approach to allow greater creativity is a welcomed change for many. Including, once again, fans.

It could be very tempting for Wyatt to come back knowing he’ll have greater range and someone that’ll listen to him and may understand his vision better.

If Wyatt does come back and makes an appearance at Clash at the Castle and play a role in Reigns and McIntyre’s match, the place will explode and everyone will be talking about the WWE.

It’d be one of those moments Vince used to try and create, but it’d also fit into a storyline that’ll have us engrossed and looking forward to seeing what’s going to happen next.

Do you believe the rumors that Wyatt’s returning? Let us know in the comments below.