Drew McIntyre has wanted a major WWE event in the United Kingdom and now that it’s here, he spoke about how amazing it will be.

The September 3rd WWE Clash at the Castle is just one day away taking place at the massive Principality Stadium in Cardiff, Wales. It’s expected that there could be up to 70,000 people in attendance for the UK’s first WWE stadium show since SummerSlam 1992.

In the main event of Clash at the Castle, the two-time former WWE Champion McIntyre will challenge the Undisputed WWE Universal Champion Roman Reigns for the two biggest prizes in WWE. 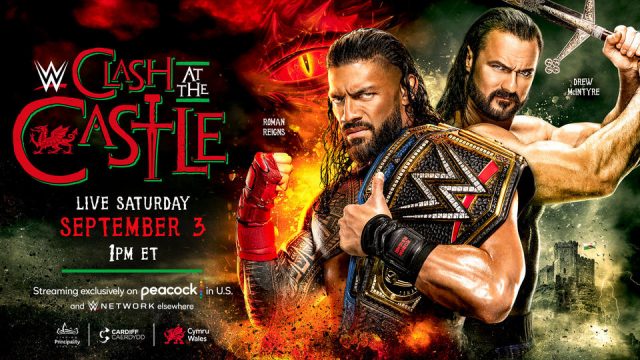 Reigns recently celebrated two years as the Universal Champion while McIntyre has never won the WWE Title in front of fans because he won those titles during the “pandemic era” of WWE due to the COVID-19 health pandemic.

While speaking to Kenny McIntosh of Inside the Ropes, McIntyre remarked that he’ll need “new things” to talk about now that WWE has finally put on a major UK stadium show. McIntyre also spoke about how amazing it is that the highly anticipated event is here:

“I’m just going to have to find new things to talk about now, because I was so adamant of making it happen. Yeah, I mean, I’ve got goals in my head. And I really need to start, you know, going out there and willing them to happen because like what happened with this one. So what I’m saying is I need a cut of the gate because I talked about it so much and it’s happening.”

“But it’s amazing that this actually happened. It is wild that we were having that press conference in London and I jumped to Scotland, told you got to fly back, things are not looking too good. Made everybody go and film the BT Sport advert at like six in the morning because I had to leave a lot earlier, and we got it done. I was in my underpants, the freezing cold highlands with hailstones, but we got it done.”

“And they did another amazing advert just there with the wife and I for this show, but just looking at the past two years, everything that’s happened, it’s been wild. Drew McIntyre has missed out on a few big moments with the live fans, and that’s how we make top superstars in WWE is collecting those top moments. And, you know, tomorrow, I can’t think of a better moment to really elevate McIntyre to that next level than having that moment like Clash At The Castle.”

McIntyre has spoken openly about wanting to see major WWE shows in the UK and even suggested a future WrestleMania. In the past, there have been some WWE UK pay-per-views like Capital Carnage, Insurrextion, and Rebellion that were UK-only shows, but they were not considered major events.

The first McIntyre won the WWE Title was at WrestleMania 36 in 2020 when he beat Brock Lesnar in an empty WWE Performance Center. As McIntyre noted above, he was filming footage in the UK to build that match when he got the call to go back to the US due to the COVID pandemic causing the world to pause for many months. Instead of a huge moment in front of a stadium full of fans, McIntyre’s

When McIntyre last faced Reigns on a Premium Live Event, it was at Survivor Series 2020 with the Universal Champion Reigns beating McIntyre, who was the WWE Champion at the time, thanks to some help. No title was on the line that night, but it will be at Clash at the Castle on Saturday in Wales.

h/t Inside The Ropes